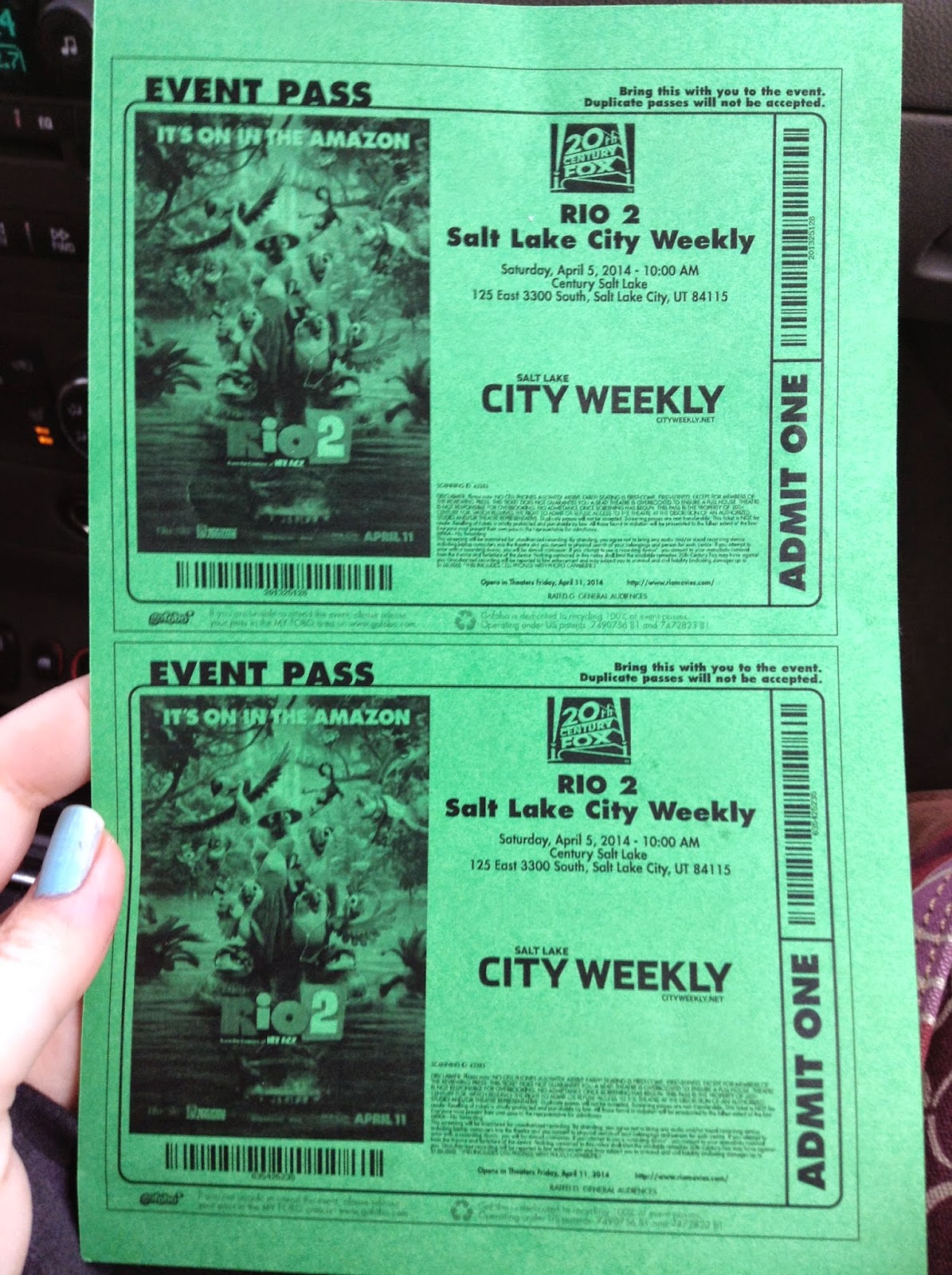 I won two screening passes  (Thank you Salt City Weekly!) to see Rio 2 this past Saturday and I was so excited because!

A) I love winning contests
B) Tony and I had seen the first one on our honeymoon
C) It's been awhile since we have been able to go to a movie screening
D) I LOVE BIRDS!! 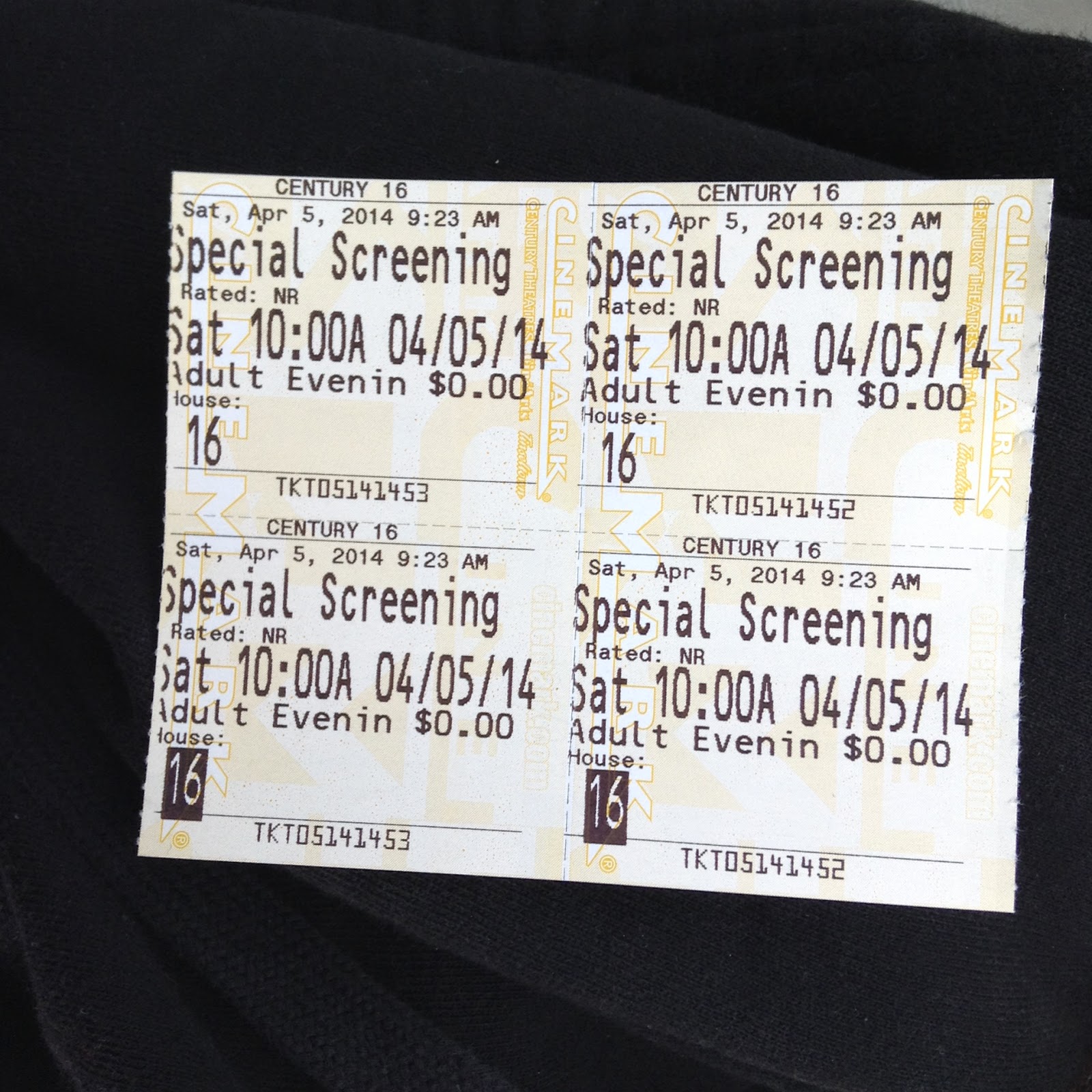 We almost turned around when we got to the theater because people were holding their green papers and walking back towards their car from the movie theater. I decided to jump out and double check and I am so glad I did because there were still seats left.  People had just been walking out to their cars to put their phones away because they would not be allowed in to the movie with their phone.

The movie opens to the public on Friday the 11th. I dont want to say too much about the movie and besides, I have never reviewed a movie on this blog yet. But I do want to say I really enjoyed this movie - I smiled pretty much the whole time. We saw it in 3D which was fun and the soundtrack was pretty awesome. There were a lot of familiar voices in this animated film such as Anne Hathaway, Bruno Mars, Jamie Foxx and Will.i.am. Pretty cool! Let me know if you plan on seeing the movie. Did you see the first one?
Stacie Reviews It

February 05, 2015
I've been upping my blogging lately and working on redoing what I do, as in, I have too many blogs and I am trying to think of what I can do to get rid of 1 or maybe 2 of them. In the meantime, while I figure that out, you may have noticed that Stacie's Place is now a .com! So excited to finally just DO that. I think it looks great and will be easier to tell people as well. Check out the Valentine's Pinterest Party I hosted last week I also took a quick trip to Idaho over the weekend with my sister and her boys Tony & I got to go to Midway to see the ice castles for our first time ever. School is going awesome!   I blogged about some moving tips for moms (or anyone!) and have you heard of the Great Inflatable Race ? What fun things have you been up to lately? Link me in a comment below and I will come check it out or comment back!
Read more

November 12, 2013
So last week I started a brand new job after being let go from my previous job , had a couple weeks off to chillax and send out resumes. It was a nice break. In the past all my jobs have been found on Craigslist, but this job I got was actually on KSL.  I felt like I totally bombed the interview (in a bad way) and left feeling like whatever was going to happen would happen, I did the best I could. There were 3 people in the room for the interview and that makes me even more nervous than I already am at interviews! So I was really surprised when I got a call a couple hours later saying they wanted to hire me. I was pretty shocked!  November 4th was my first day at this company called Symbiot, but most of our customers know us by Integrated or Pipeline. Basically I do customer service for companies who need things done at their business or location. We are a "maintenance management company." For example, servicing cell phone towers if there are weeds or broken locks, s
Read more

**This post is sponsored by Homie ** Owning a home can be expensive and a lot of work. But if you break it down and work on this list monthly to maintain certain things in and with your home, it will certainly save you time, and money, for other fun projects you’d rather be doing. If you haven’t started maintaining your home this year, now is a good time to get started, with spring cleaning and all that starting to get underway. Don’t feel overwhelmed by this list, it’s to do throughout the year so you could pick one category each month to focus on. Roof How is your roof holding up? It’s one thing to peer up at it when you are outside but another to actually get a ladder and climb up higher to get a better view. How are the shingles holding up? Do you live in an area that doesn’t get much rain? You can wash the shingles yourself with a regular hose, no pressure washer needed. Just a light spray will do. If you have mildew or moss, you make up a mixture of dil
Read more