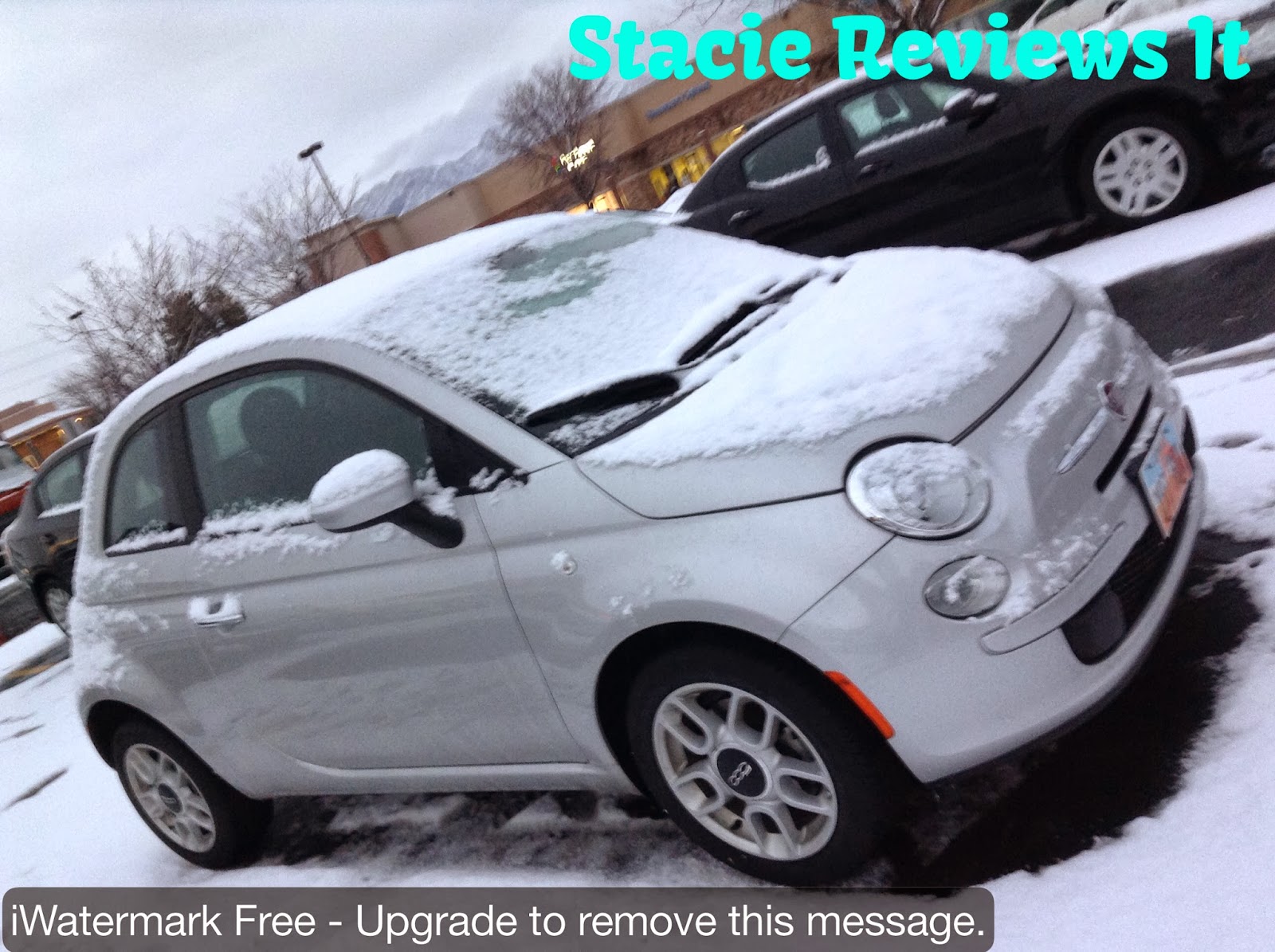 I rented this car to take to the Consumer Electronics Show in Las Vegas this past Wednesday. It wasnt the car I was told I would get from the rental website but it was what was available when I got to the location to pick up my car. It got great gas mileage so I cant complain too much I guess even though I felt like I was almost driving the 'boot car'. 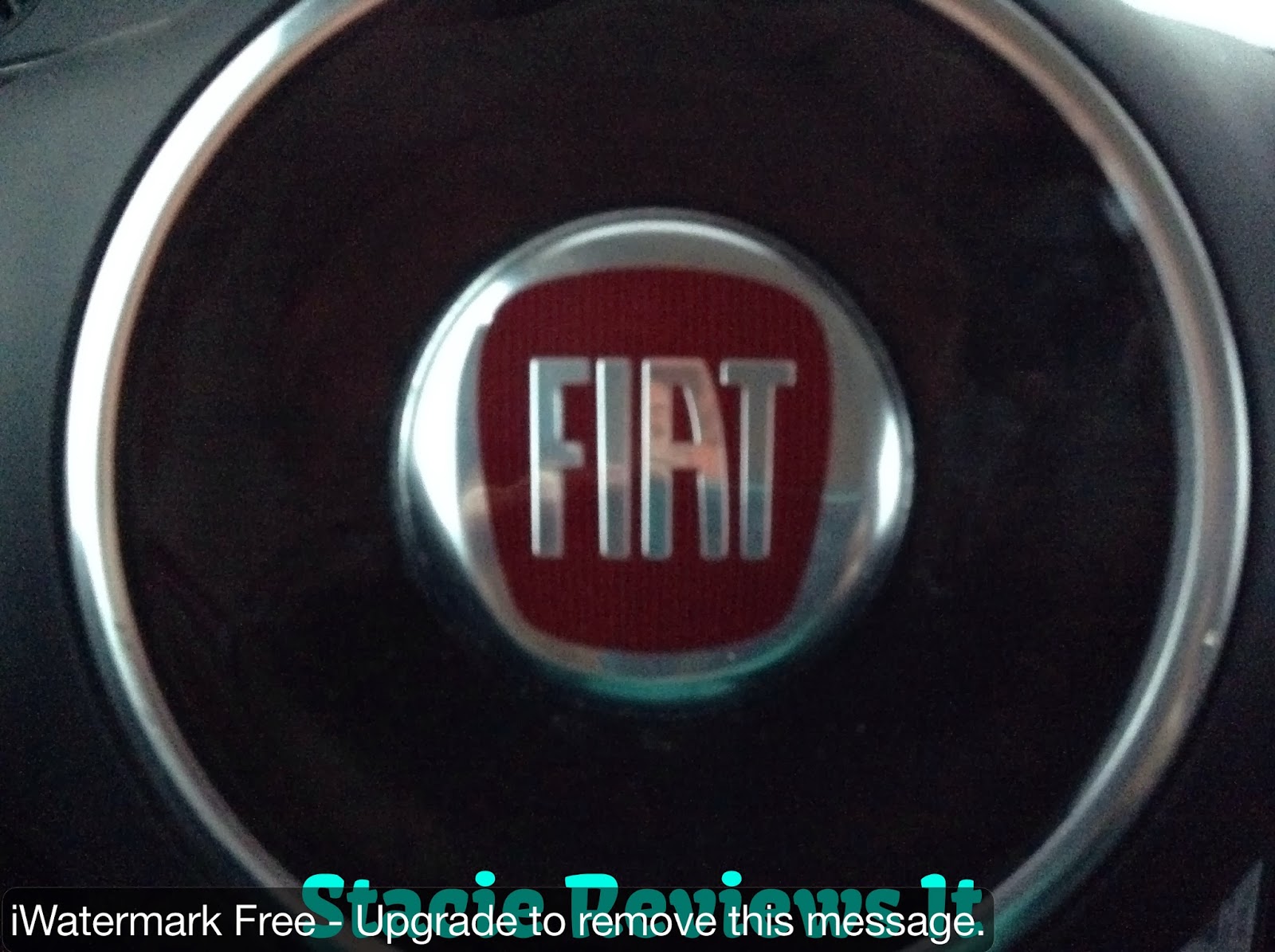 I started in SLC with a full tank and didnt fill up until I got to St. George.
I did drive around Vegas a bit so I left the next day with about half a tank and stopped in St George again to fill it up. I didnt stop again until I got back to SLC. I think the gas mileage did better on this car than it does on my current car.  But maybe it is very close to being the same. I am sad I didnt get to track it that well. 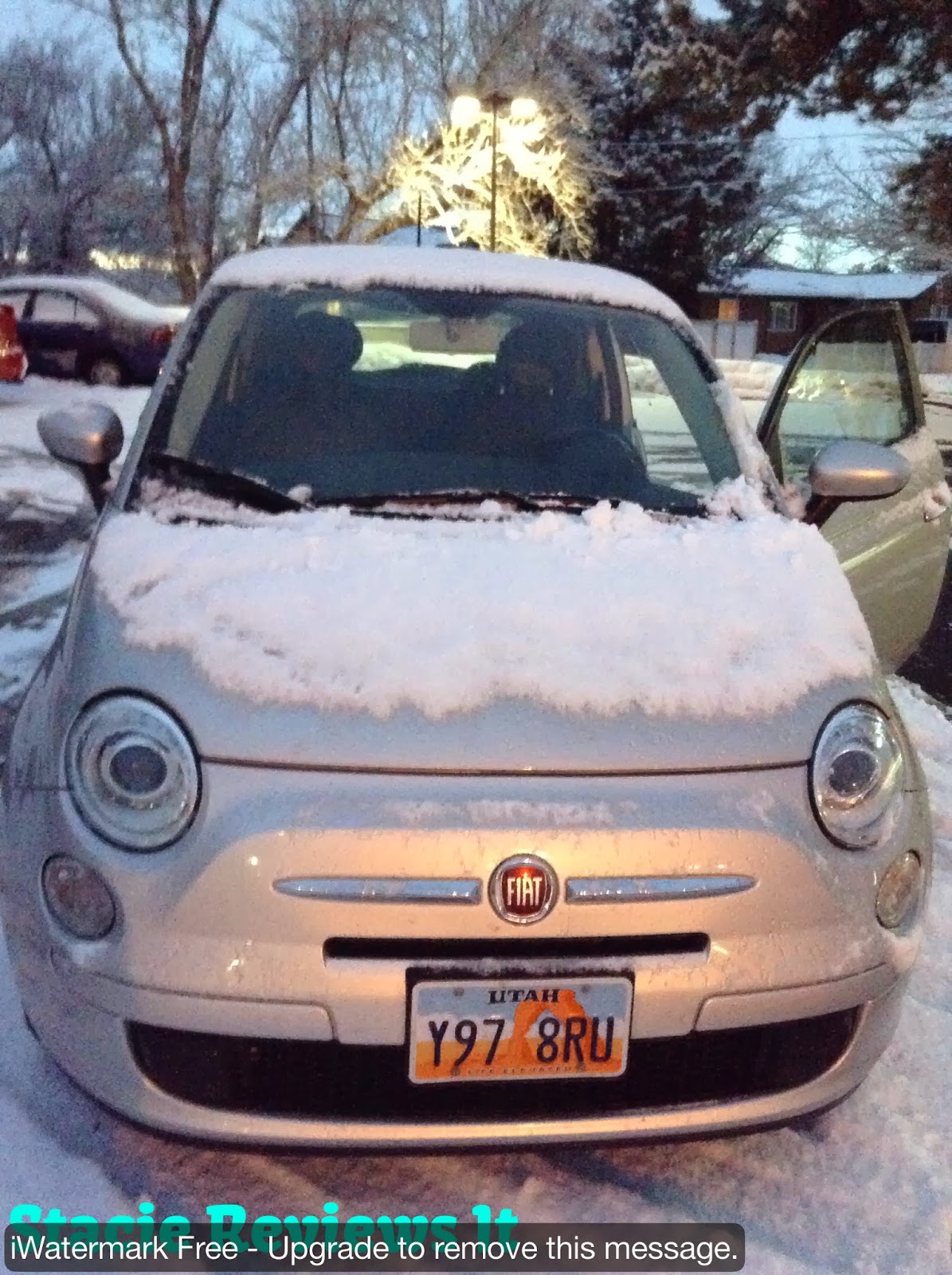 I had no time to take pictures of the car in the daylight as I picked up the car Tuesday a bit after 530pm , left about 7pm to go to Vegas. On Wednesday I left Las Vegas around 845pm and got home at 430am Thursday morning. Slept for a few hours, went to work and had to return the car by 530pm. It was such a whirlwind so I am glad I managed to squeeze in a few pictures right before I dropped off the keys. 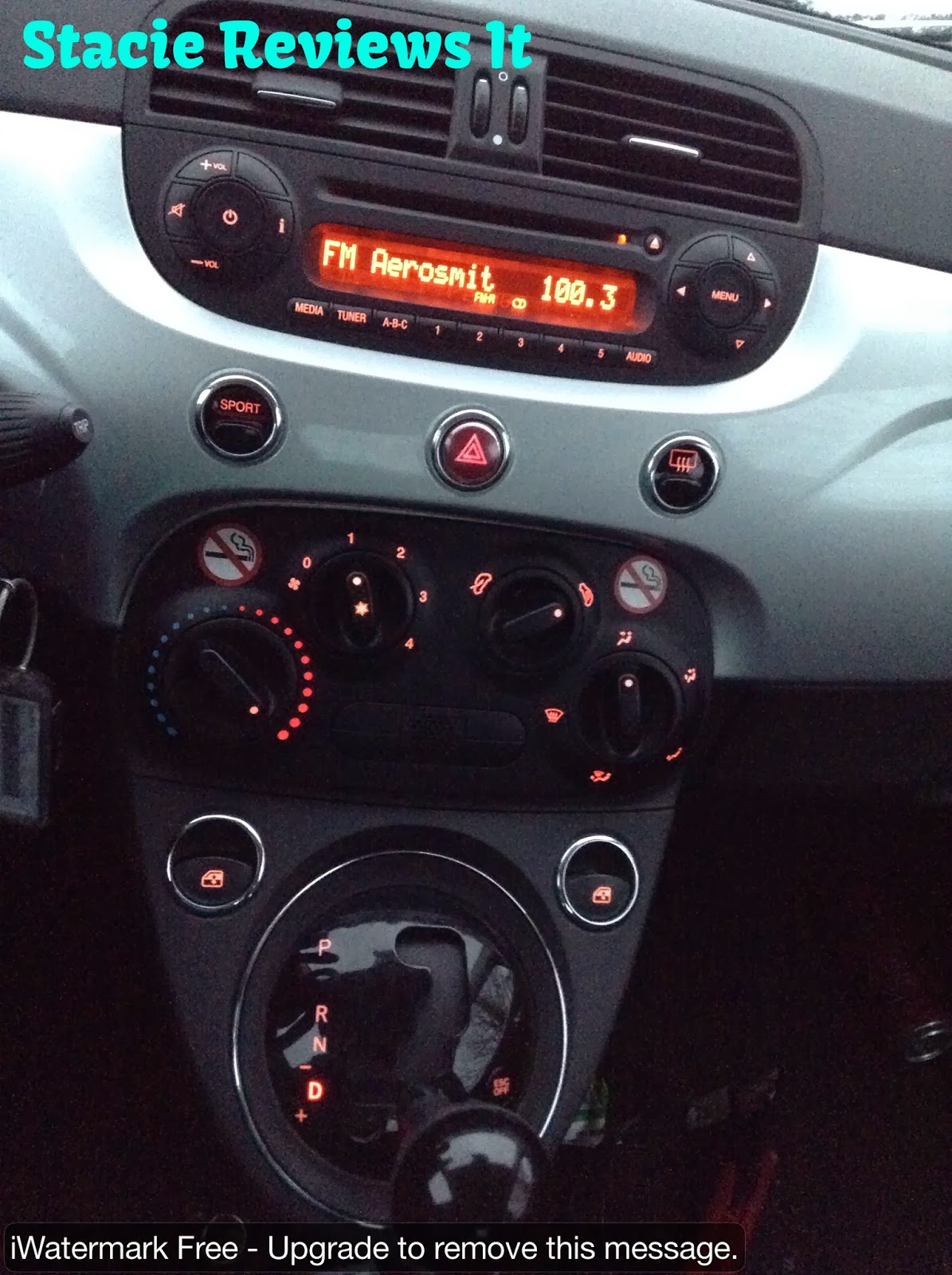 The radio area was nice but I was disappointed there was no auxiliary port. Maybe because this version of the Fiat is so basic? But it had power windows and doors so I am not sure about that. It still excites me when a car has this because right now my car still does not have that option, at least, not built in. 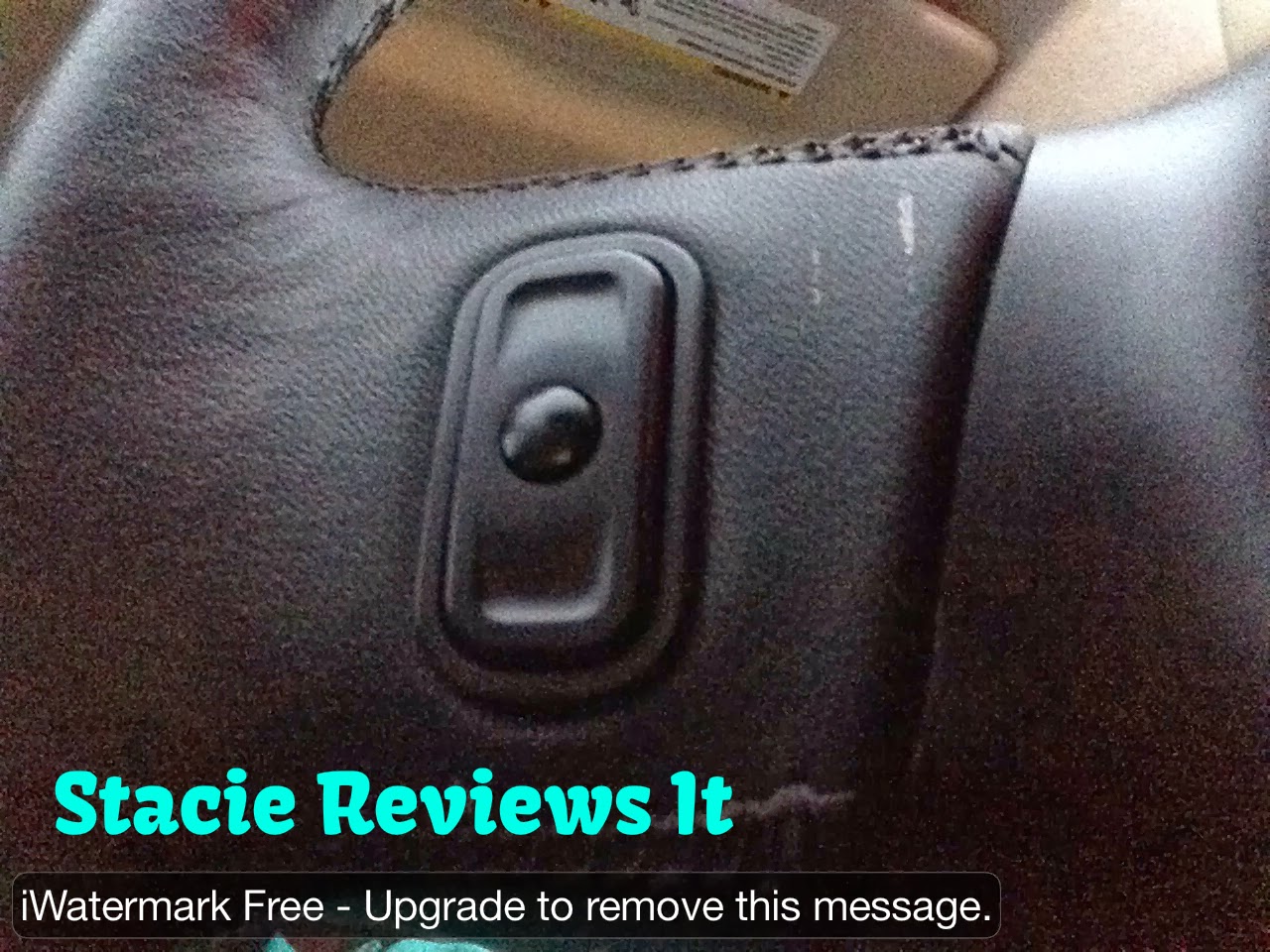 I took a tricky picture of the back of the steering wheel. I have never seen this feature before. Of course there were the normal control buttons on the steering wheel but this little button on each side behind the steering wheel controlled the volume and also the stations. I felt like this was very easy to use and it was nice not having to reach somewhere else, my hands were naturally right here to change the station or control the volume. 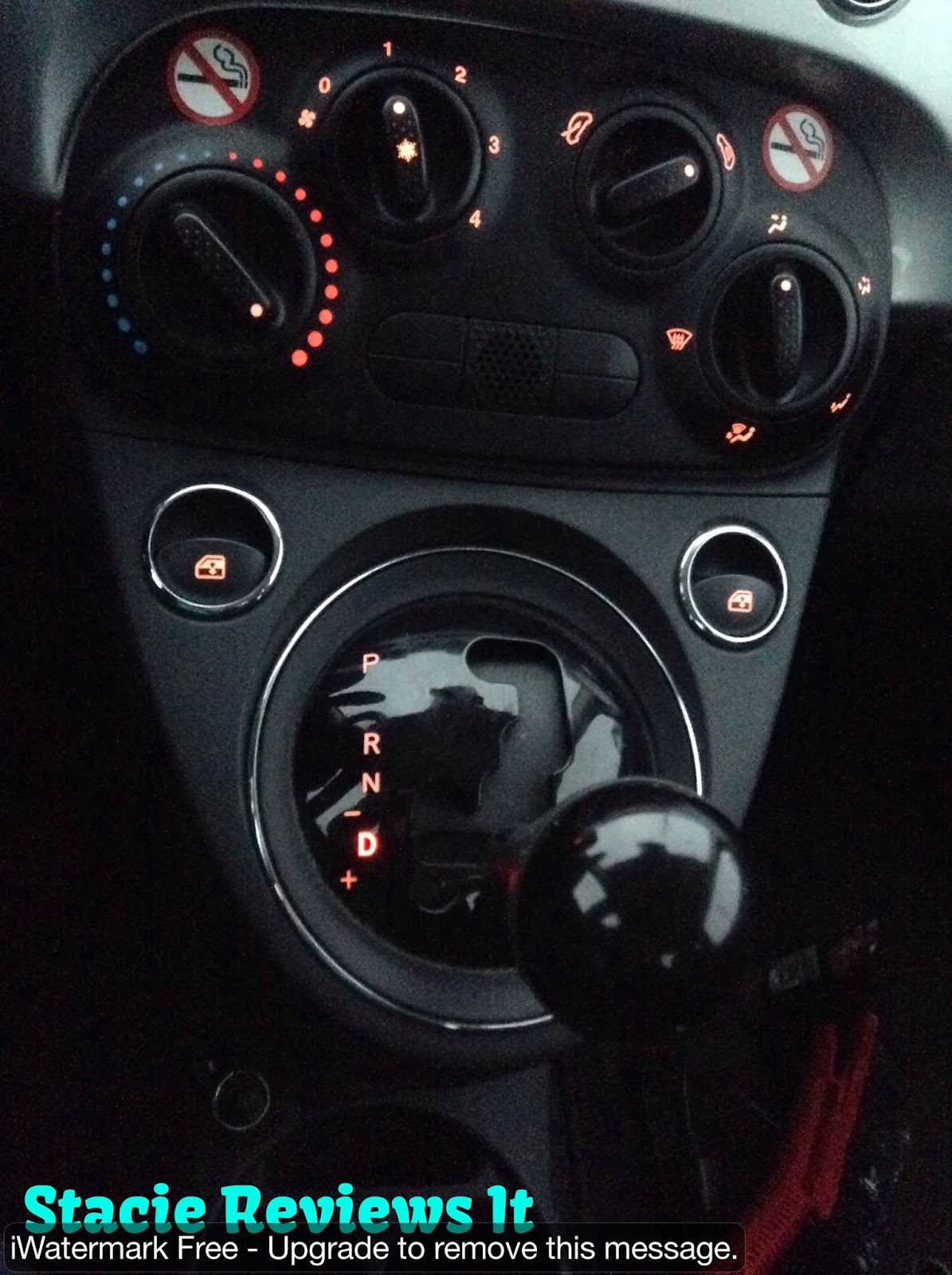 The control stick towards the bottom in the picture above was a little tricky, one time I was driving in the wrong gear because I didnt know that it wasnt in drive. *user error I'm sure.*   There are two round buttons below the controls for the heat/ac and they are to roll up and down the windows. Such an odd place to put those buttons but I eventually got used to it. 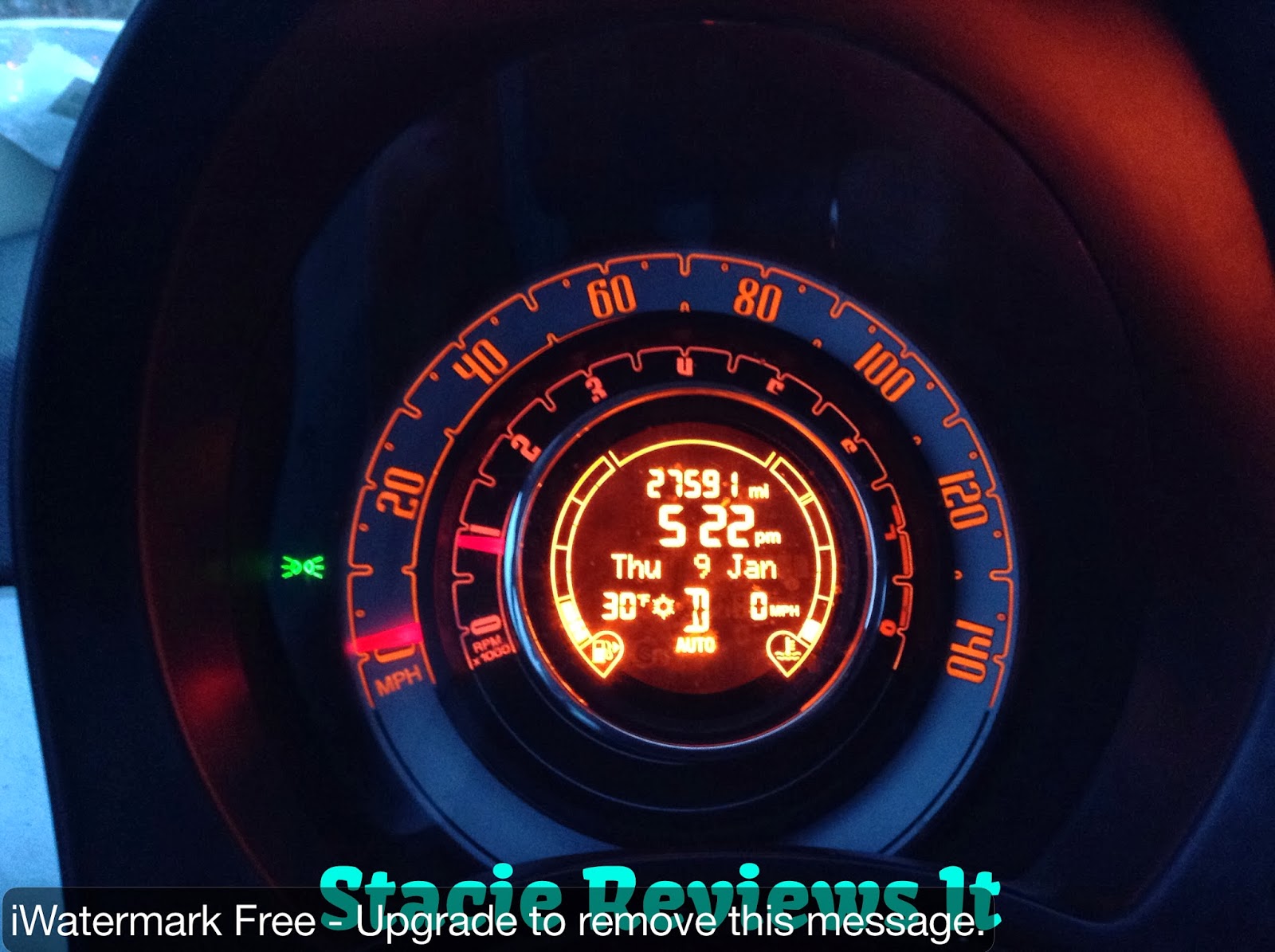 I did like how all the information on the dash was right in one spot. It was very different to look at at first but I ended up loving how they designed this.  However, neither Tony or I could figure out how to reset the miles for a trip A and a trip B. It would have been nice to know exactly what kind of gas mileage I was getting. There were some buttons towards the bottom right of this picture but pressing them, holding them down, no matter what we did, we were not able to get the counter to start at 0 for my trip. Oh well! 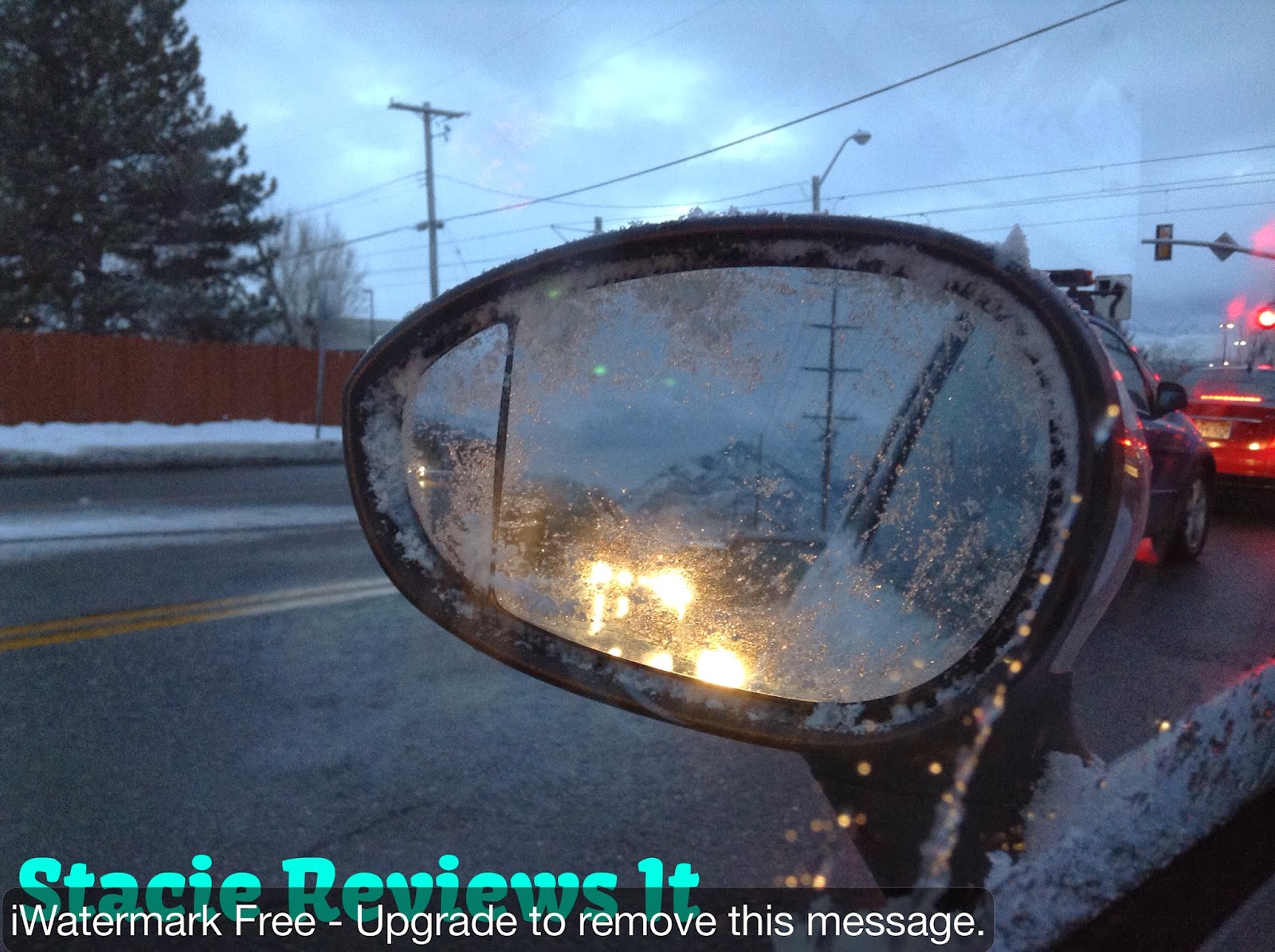 When I looked over my left shoulder it was terrible to see if there were any cars coming. Ginormous blind spot - at least it felt that way. The driver side door had this interesting mirror that I am thinking was supposed to help with blind spots. It was not on the right hand side mirror. I dont think it helped me much but if I had driven the car for longer than about a day, I might have learned how to use it. 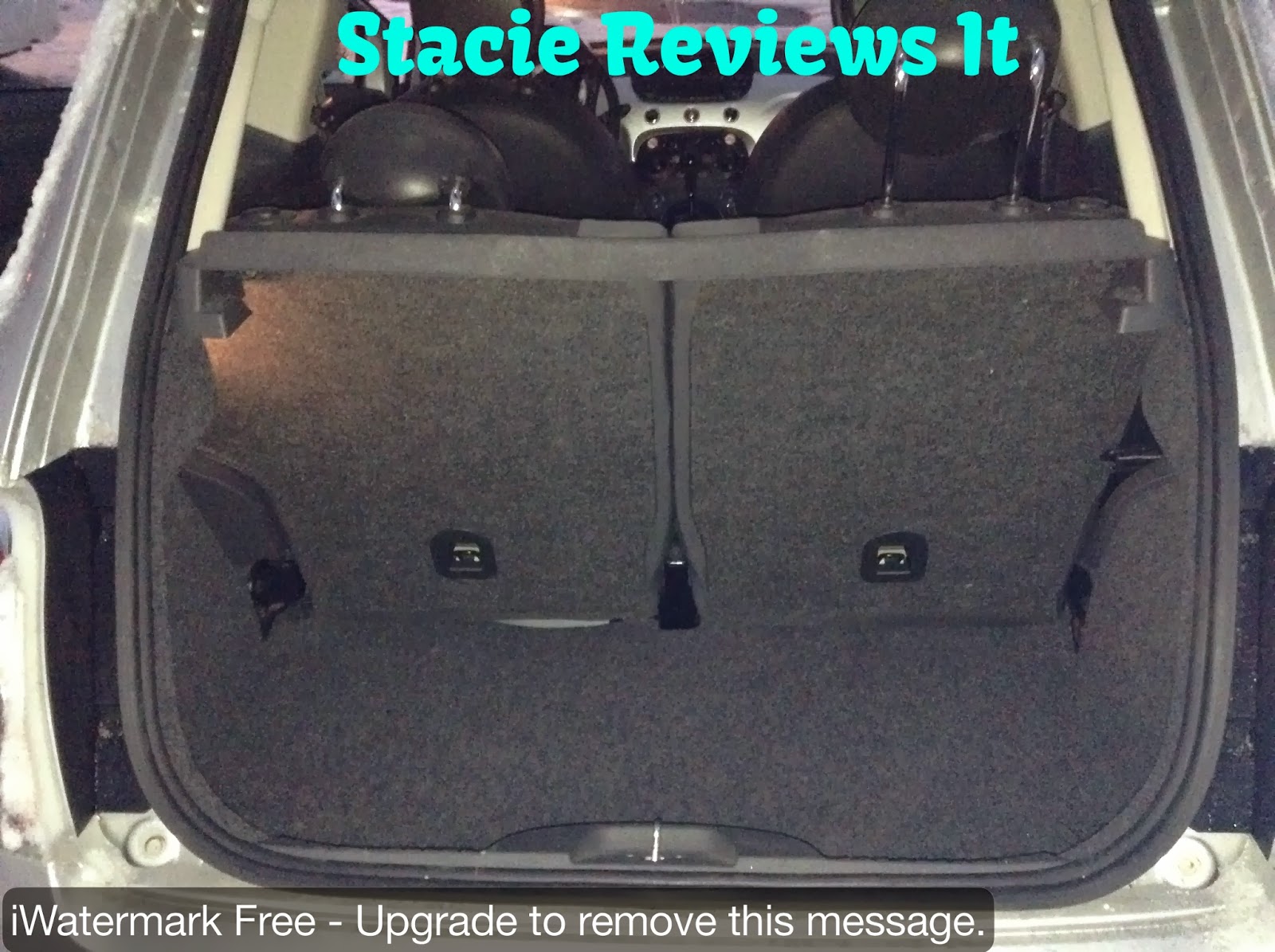 Considering the size of the car, I thought that the trunk space was decent. I was able to fit my duffel bag and backpack back there as well as the friend who rode with me was able to fit his backpack. Probably about half the size of my current trunk (Mazda Protege5)  but if you need extra space and didnt have anyone riding with you, it looked like the seats could fold down very easily. 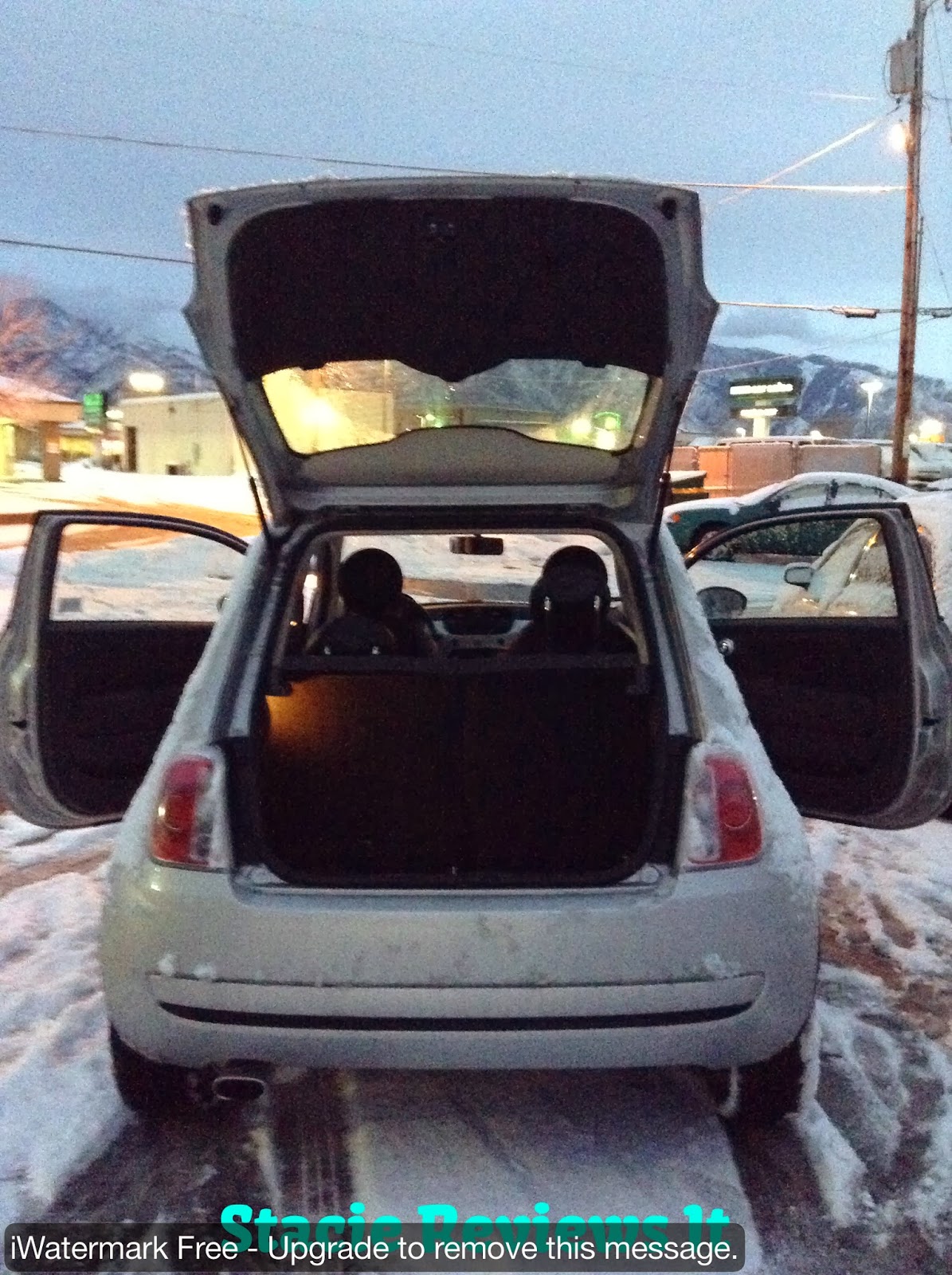 Pros:
- where the button was located to control the radio volume and stations
- gas mileage seemed really good
- size, it was easy to park
- great u-turns

Cons:
- the big blind spot over my left shoulder. It made me so nervous
- tried hard to set up my phone to the bluetooth. I pressed all the buttons, it should not be so hard?
- unable to figure out how to set trip A and B. Even Tony looked and was unable to get it
- no auxiliary port

All in all a great little car though and I might not mind renting one again as long as I dont have a lot to take with me. 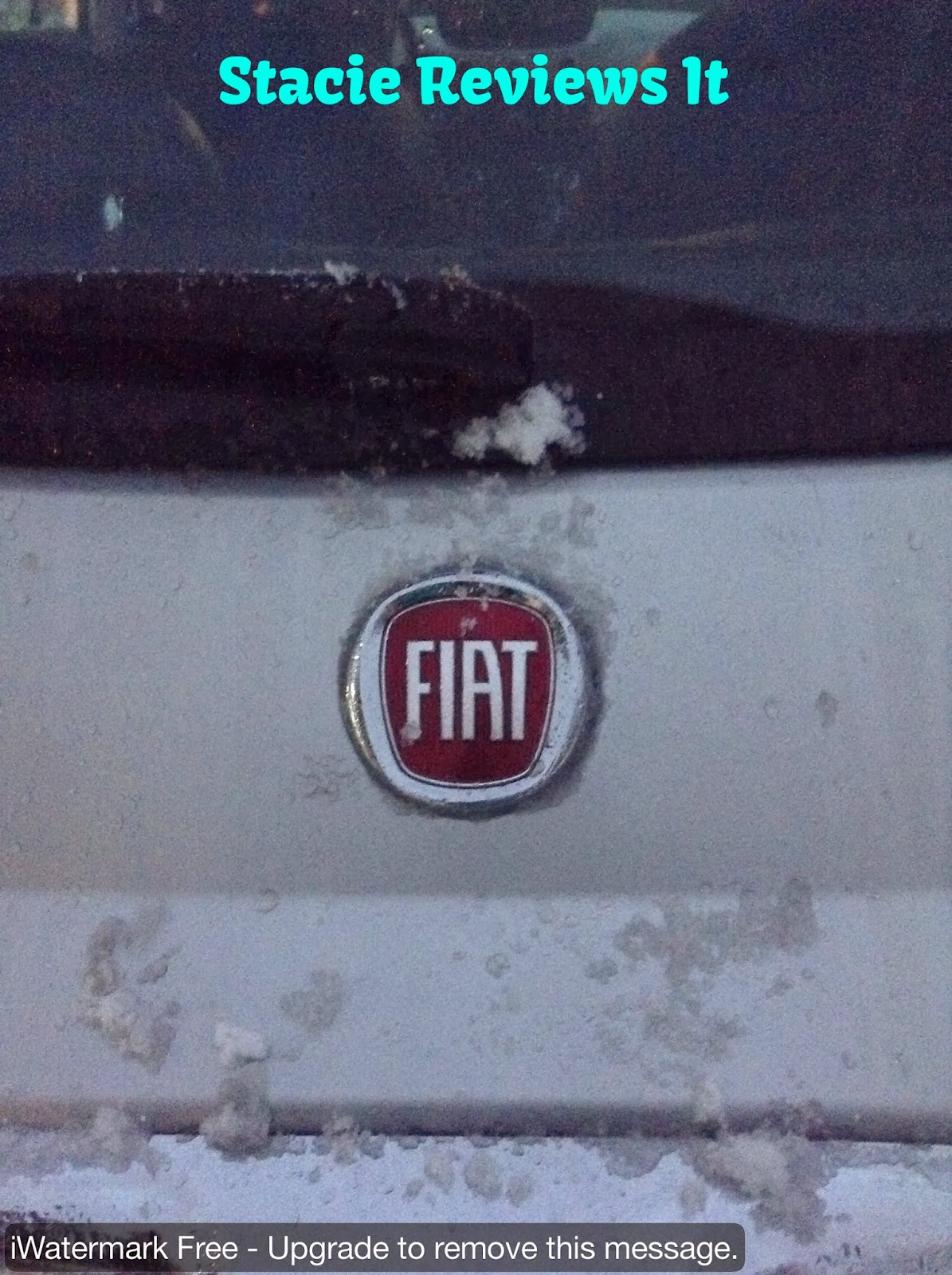 Thanks for reading!
Stacie Reviews It

February 05, 2015
I've been upping my blogging lately and working on redoing what I do, as in, I have too many blogs and I am trying to think of what I can do to get rid of 1 or maybe 2 of them. In the meantime, while I figure that out, you may have noticed that Stacie's Place is now a .com! So excited to finally just DO that. I think it looks great and will be easier to tell people as well. Check out the Valentine's Pinterest Party I hosted last week I also took a quick trip to Idaho over the weekend with my sister and her boys Tony & I got to go to Midway to see the ice castles for our first time ever. School is going awesome!   I blogged about some moving tips for moms (or anyone!) and have you heard of the Great Inflatable Race ? What fun things have you been up to lately? Link me in a comment below and I will come check it out or comment back!
Read more

November 12, 2013
So last week I started a brand new job after being let go from my previous job , had a couple weeks off to chillax and send out resumes. It was a nice break. In the past all my jobs have been found on Craigslist, but this job I got was actually on KSL.  I felt like I totally bombed the interview (in a bad way) and left feeling like whatever was going to happen would happen, I did the best I could. There were 3 people in the room for the interview and that makes me even more nervous than I already am at interviews! So I was really surprised when I got a call a couple hours later saying they wanted to hire me. I was pretty shocked!  November 4th was my first day at this company called Symbiot, but most of our customers know us by Integrated or Pipeline. Basically I do customer service for companies who need things done at their business or location. We are a "maintenance management company." For example, servicing cell phone towers if there are weeds or broken locks, s
Read more

**This post is sponsored by Homie ** Owning a home can be expensive and a lot of work. But if you break it down and work on this list monthly to maintain certain things in and with your home, it will certainly save you time, and money, for other fun projects you’d rather be doing. If you haven’t started maintaining your home this year, now is a good time to get started, with spring cleaning and all that starting to get underway. Don’t feel overwhelmed by this list, it’s to do throughout the year so you could pick one category each month to focus on. Roof How is your roof holding up? It’s one thing to peer up at it when you are outside but another to actually get a ladder and climb up higher to get a better view. How are the shingles holding up? Do you live in an area that doesn’t get much rain? You can wash the shingles yourself with a regular hose, no pressure washer needed. Just a light spray will do. If you have mildew or moss, you make up a mixture of dil
Read more